I recently saw someone on the retrobike forum kindly offering, free to a good home, a late 90’s Kona U’HU frame which needed some work. I probably (definitely) have too many Kona’s already, but I have a love for this era of Kona, and it was the best price… free, so i sent him a message. The donor was in Staffordshire but more than happy to wrap and post the bike for just the postage cost, so I happily accepted. 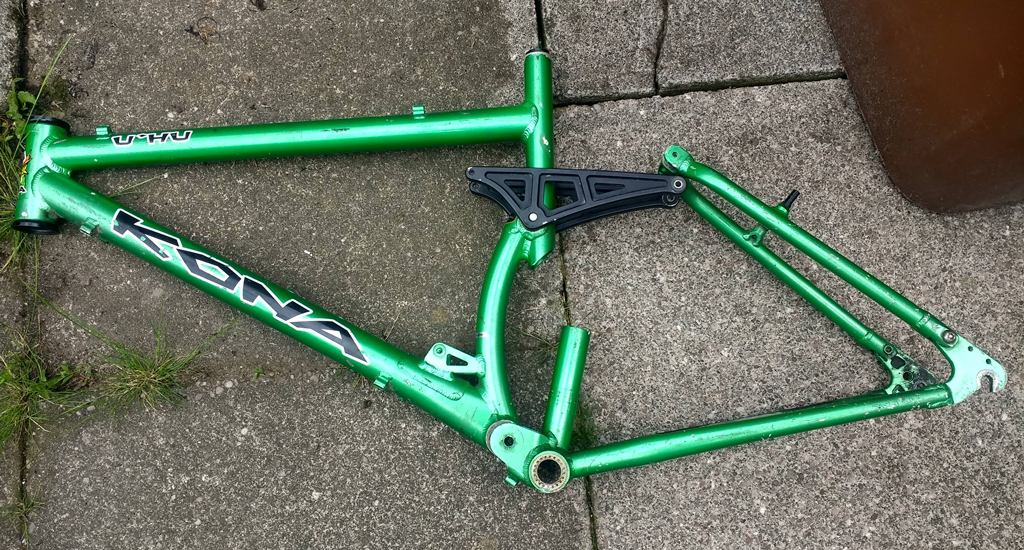 A quick search on the Classic Kona website revealed the U’HU (pronounced Yoo-Hoo) is a 1998 7005 aluminium double butted frame, originally at the heart of a £1700, mid-range cross country bike. 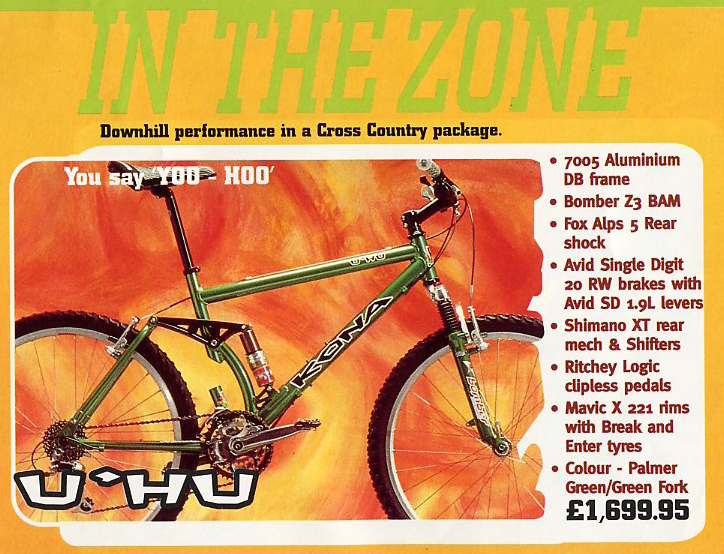 The frame isn’t perfect, the paint had numerous marks on it, but the two biggest problems are that one of the chainstays has taken a real beating, and it has a seat post stuck in it. When I say stuck, it looks really stuck, there’s the tiniest bit of exposed seatpost sticking out, and it’s all the way to the bottom. Even though the shape of the frame looks like you might be able to knock it out, there is a ridge inside the tube which makes this extremely difficult. The guy offering it has already had a go. Having looked at the pics, it looks like a bit of rust is showing on the seatpost, suggesting steel, and there’s about 7mm of exposed metal showing, so my hope is that it’ll be possible to weld something to it and then get it out 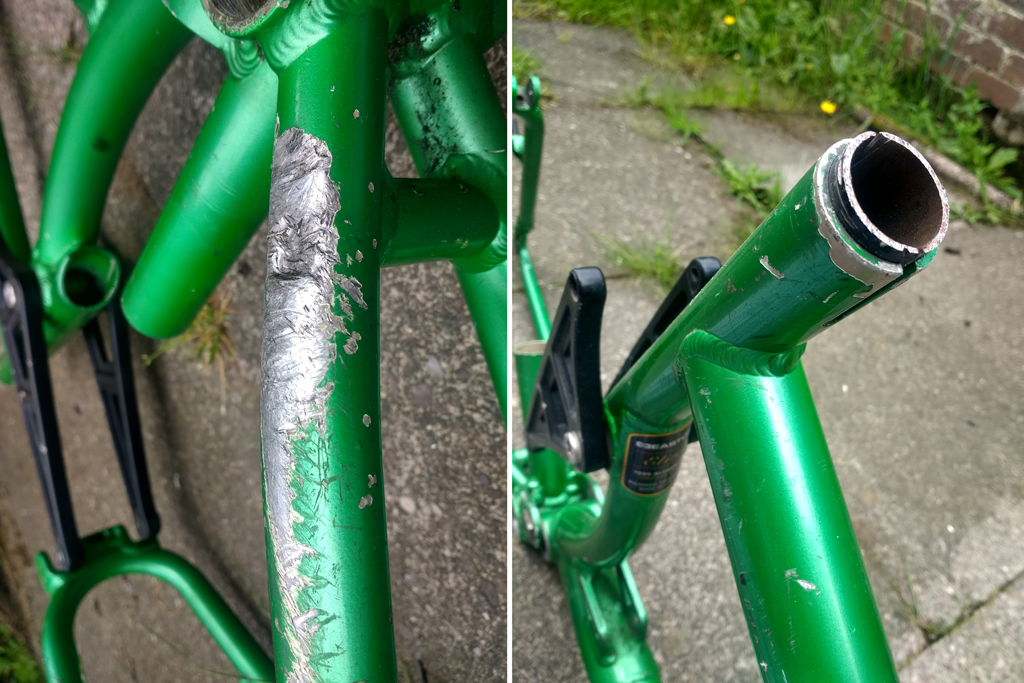 Fast forward a few days and a very well wrapped parcel arrived at my door. On unwrapping, the chainstay looks quite bad but hasnt gone all the way through, I do have a spare rear end from a different year of Manomano, but after comparing the two, it doesnt look to be a direct swap. I’m tempted to try a chemical metal fix on the existing rear end, rather than have it welded and risk warping it. The seatpost is indeed steel, so my plan should be possible in theory.

Thanks to work commitments, it’s now another week since the frame arrived, and the hottest day of the year so far, just perfect for welding in a metal roofed garage. I have a 4ft length of box section kicking around, so my aim is to clean up the exposed fraction of seatpost, and try to weld it to the bar which I can then use to rotate it. 10mins later, we have a long piece of box section welded to the seatpost, and the bar is clamped in the vice. 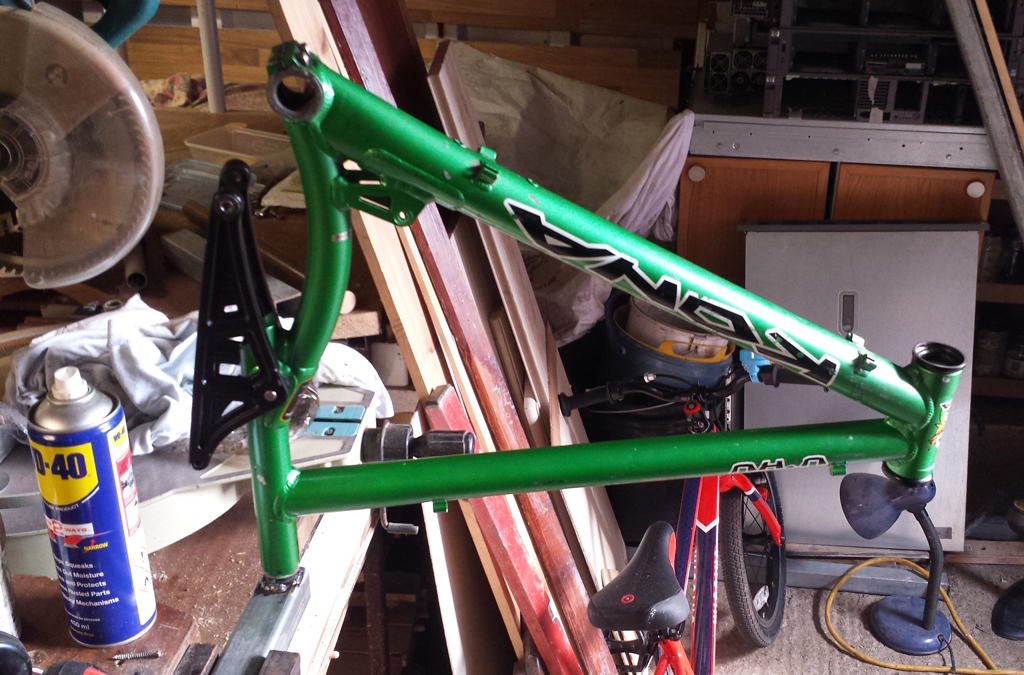 I’ve given the whole thing a liberal spray of WD40 to try and ease things. I now proceed to rock the frame back and forth applying some upward pressure. It’s extremely difficult to move, and after a few minutes I have to take a break. 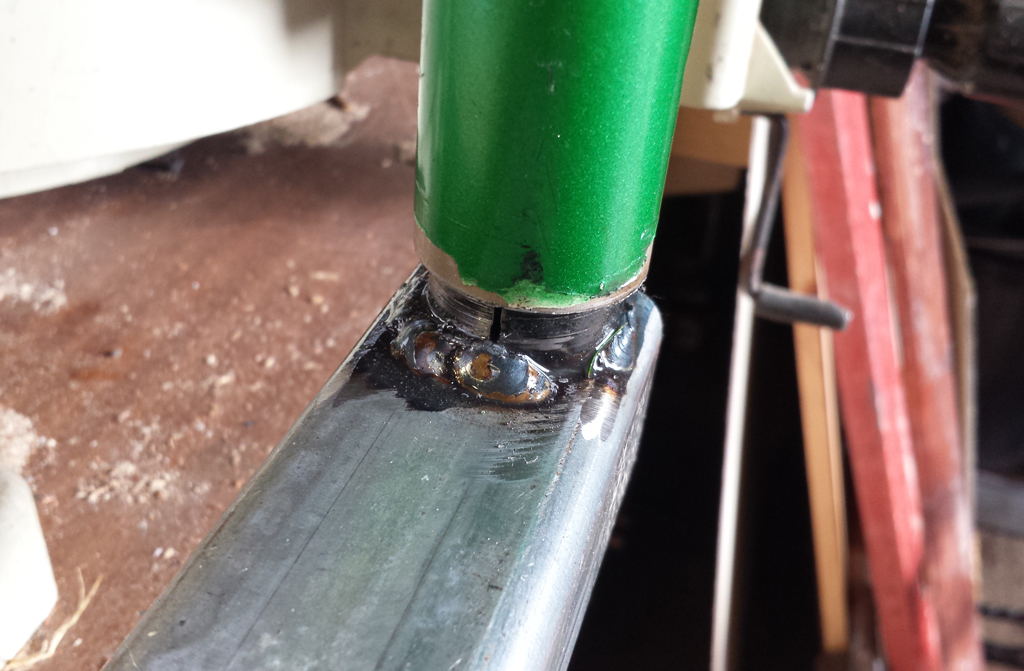 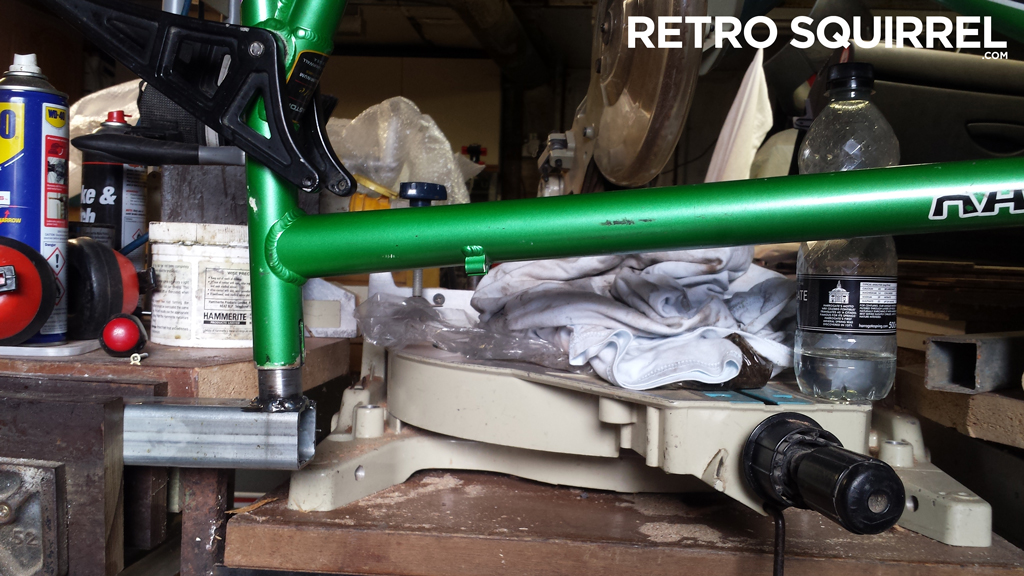 I realise that I’m stupidly working against gravity, so flip the assembly upside down and try again. After some more effort (half an hour of on and off attempting to shift it, we have over an inch of exposed post, but it seems like it wont come out any further. 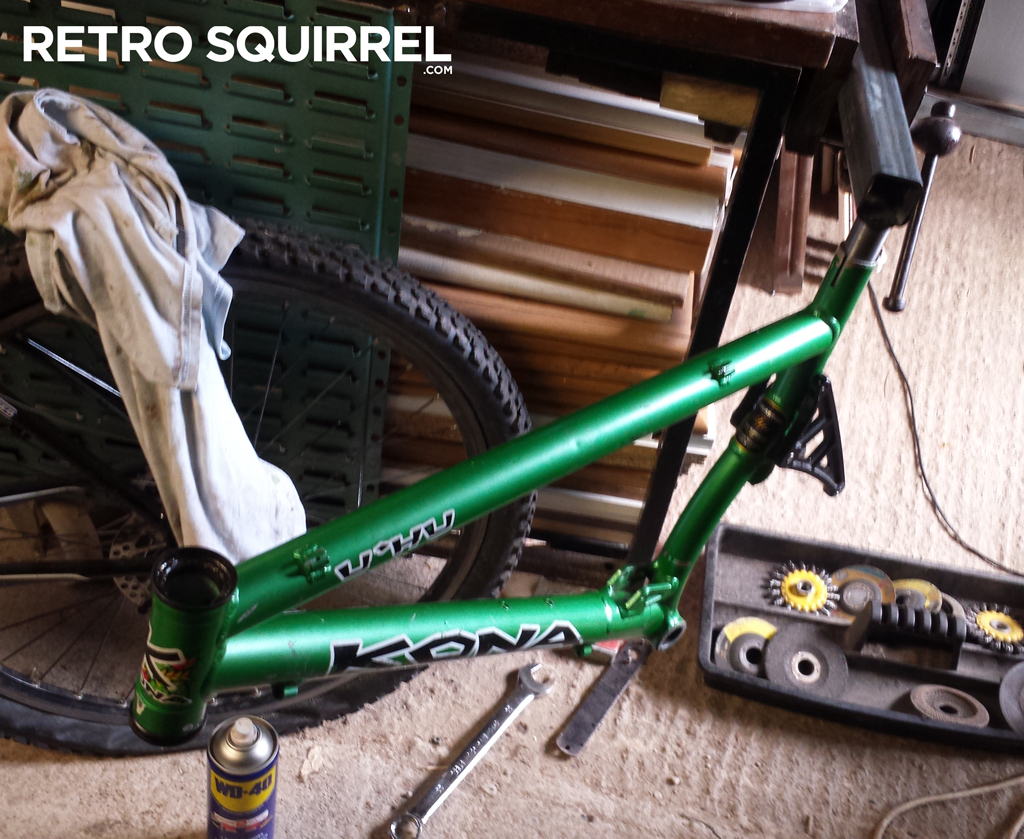 I decide to mount the box section vertically, letting me rotate the frame 360 degrees rather than rocking back and forth. This, although very hard to do, gets better results, with each rotation in an anti-clockwise direction giving a millimetre more of exposed post. After around 10 rotations, things begin to speed up with 2mm and then 3mm of post appearing with each turn. A few minutes later, the whole post is out to much relief. 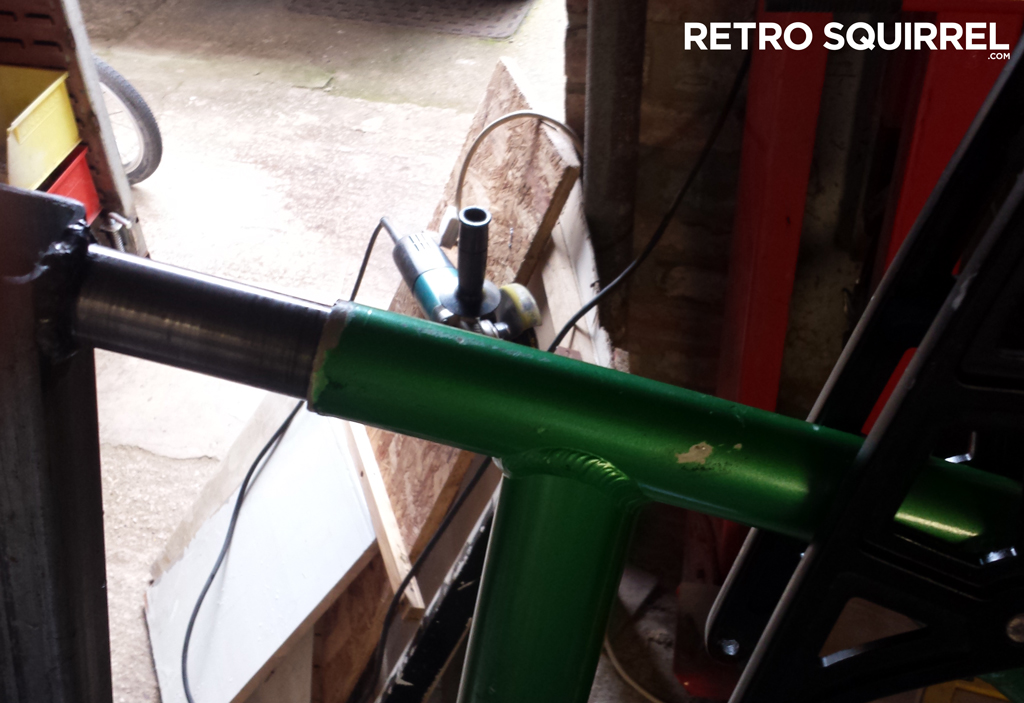 The marking’s reveal it’s a 27.2mm post (0.2mm oversized) and the sticking must have just been a result of a combination of the tight fit, different metals bonding together, and it being inserted a bit too far. 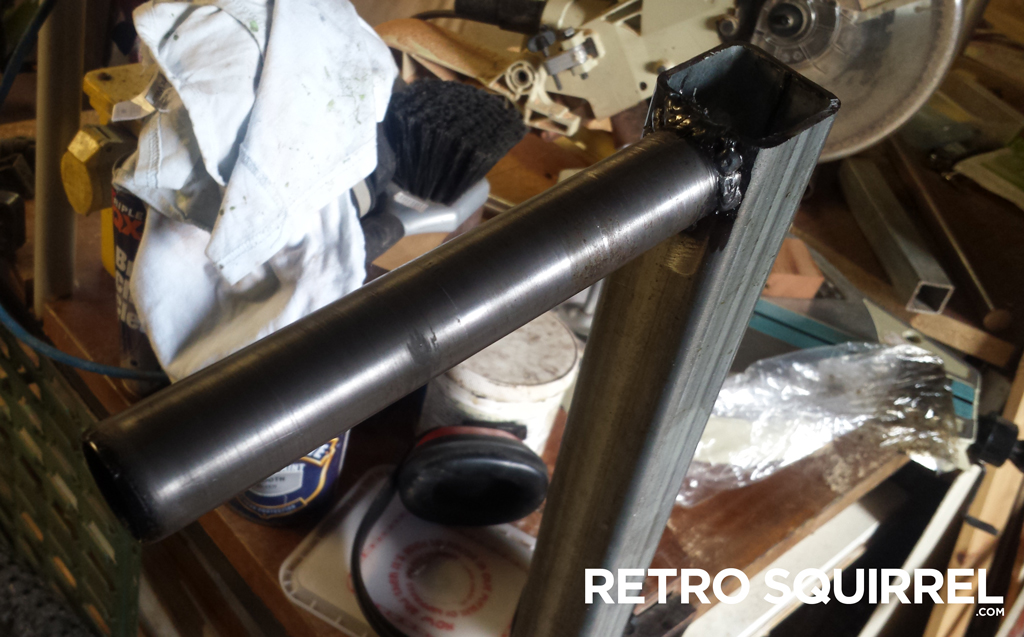 The U’HU lives to fight another day! The next step will be replacing the pivot bushes and missing bolts. 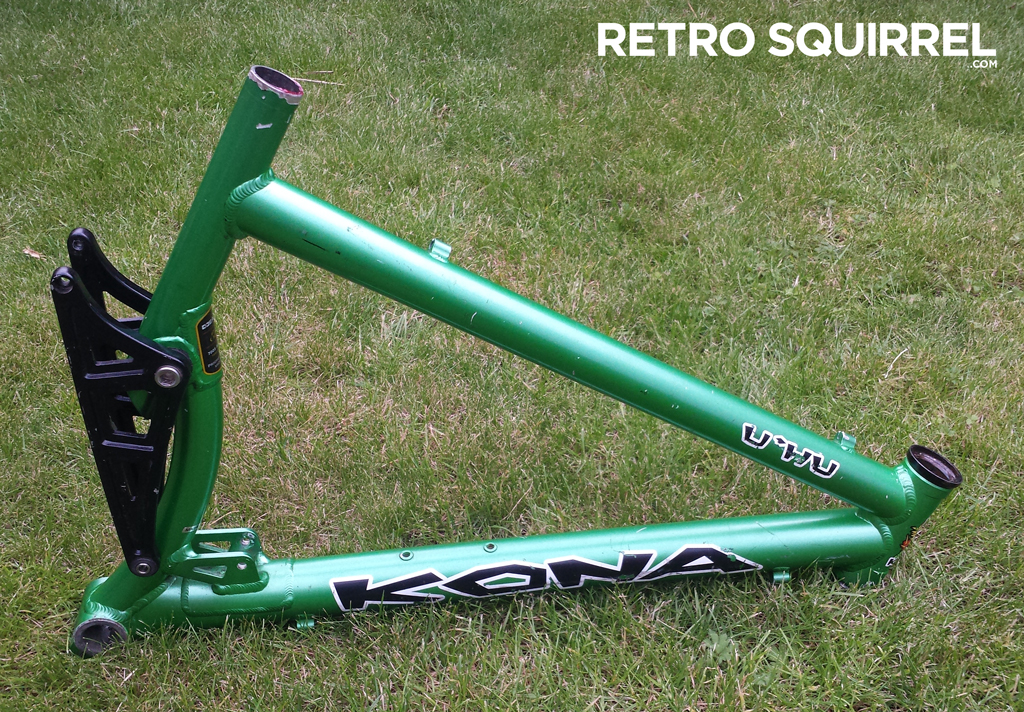